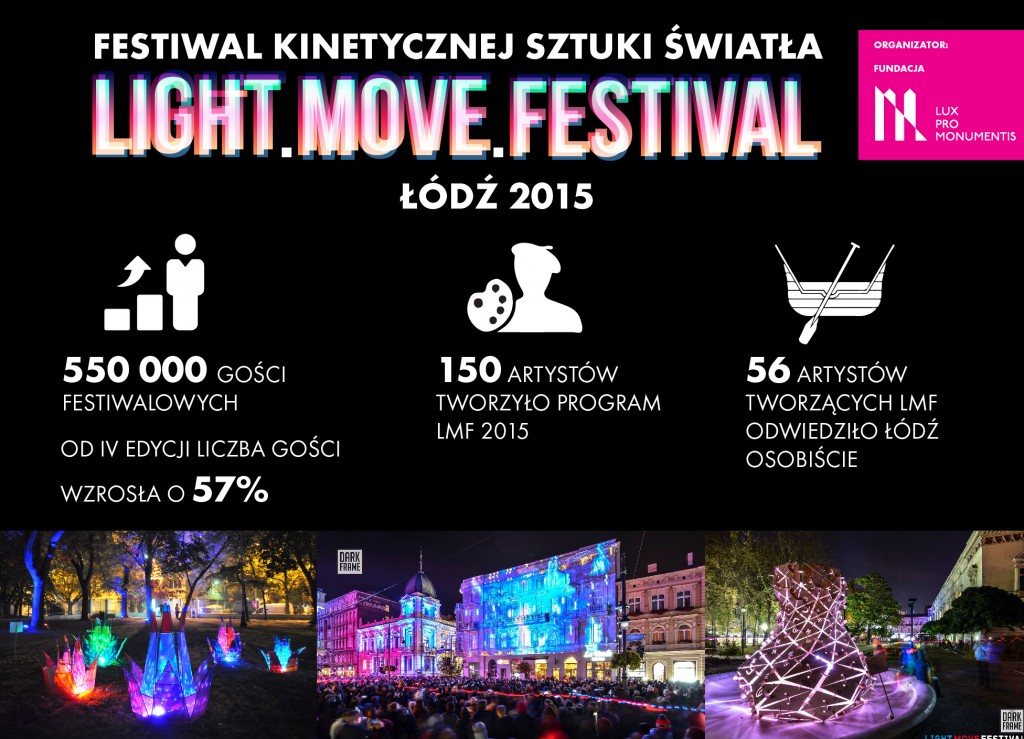 On Friday, October 23rd, the Lux Pro Monumentis Foundation – the organizer of the Festival of Kinetic Art of Light - Light.Move.Festival. held a press conference as a summary of the fifth edition of LMF.

Beata Konieczniak, the creator of Light.Move.Festival., talked about the results of surveys conducted among the festival guests and owners of service points located within the festival area – shops, restaurants, pubs – as well as hotels and hostels of Lodz.

LMF team is extremely happy that the festival has a real effect on the region economy and makes people want to spend their spare time wandering around the lighted city. Thank You all for Your opinions and all great ideas. See You next year!

On Thursday, October 8th, the Lux Pro Monumentis Foundation – the organizer of the Festival of Kinetic Art of Light - Light.Move.Festival held a press conference on the fifth edition of LMF.

The guests of the meeting were: Hanna Zdanowska , representatives of Philips Lighting Poland – the Strategic Partner of LMF and our great artists from Austria, Belarus and Poland : Lodz, Szczecin, Crakow and Białystok.

During the press conference profiles of the artists and their ideas for LMF 2015 were presented. You can find the list of our artists and visualizations of their work on our website: http://lmf2015.lmf.com.pl/artists-2015/

On Thursday (24th September) Lux Pro Monumentis Foundation – the arranger of Festival of Kinetic Art of Light – Light.Move.Festival., in collaboration with EC1 – “City of Culture” organized the second press conference on 5th edition of LMF. The festival map and traffic organization was presented during this meeting. The conference was organized by Beata Konieczniak – creator of Festival of Kinetic Art of Light and a member of the Lux Pro Monumentis foundation’s council.

During her speech she mentioned that not only is a new festival area a great pleasure from creating and arranging new, full of potential city spaces but also a huge challenge for organizers. Schedule of 5th edition of Festival of Kinetic Art of Light – Light Move Festival, was planned with intention of making festival guests see and visit various incredible spots in Łódź. Another streets covered with colorful light, another buildings as a background for light projections, another green areas jazzed up by light installations. During this edition we enter the newly revitalized space of former power station – EC1. Building and monuments, severe modernity in connection with visual arts will create an unforgettable show.

Błażej Moder – the director of EC1 Łódź “City of Culture”, was another one who gave a speech. He said that the first phone he had picked up after becoming a director, was an offer to collaborate with LMF. What fruit has it born? Inhabitants of Łódź will have a chance to find out in the second week of October, when the space of EC1 will be open for the first time to a bigger audience. The director Moder wittily reacted to the collaboration by changing the name of EC1 to EC1 “City of Light”.

This is the place where the official beginning of LMF will take place on Friday – 9th of October at 18:45. There will also be a science conference “Light and Colour in Architecture and public spaces – about conscious creation of image of a city”. The conference is targeted at every social group having real influence on shaping the image and development of the city, workers from the whole administration ladder , designers – architects, urban planners, artists, members of associations, foundations, social and administration organizations.

During the press conference the topic of projections and mappings 2D/3D was revealed. These actions will take place in a former congeneration plant. They will focus on presenting the energy and enormity of the place. The projections will transform seemingly flat elements of modern solid into 3D space which will electrify the viewers. A newly revealed event is a play – Imaginarium – a multimedia show with dance and acrobatic elements performed by the V6 Theatre. The play inspired by industrial atmosphere of Łódź, connects unlimited possibilities of light and sound technique, the power of massive michines, precision and strength of acrobats, courage of stuntmen, delicacy of dancers and glitter of outfits. The creator and progenitor of the play is Tomasz Filipiak – the director and founder of the V6 Theatre, was present on the conference. V6 Theatre is coming out with the play beyond theatre walls to provide us with unforgettable experience creating a play on international level.

After the artistic part of the conference the traffic organization was touched upon so that participants could benefit from all the facilities during those three October nights without facing any danger. Marzanna Boratyńska from Traffic Department of City Police Command Centre in Łódź presented the gathered with a list of streets, which will be excluded from traffic for the time of the event (18:00 – 20:00). The representative of Roads and Transports Management in Łódź, Tomasz Andrzejewski calmed down the gathered. For the time of the festival some of the buses will change its routes. Additionally there will be a special LMF bus line.

On behalf of the Lux Pro Monumentis Foundation we would like to thank EC1 – “The City of Culture”, V6 Theatre, Roads and Transports Management, the Police and city guard for the collaboration, as well as to all journalists for coming. We are coming back to work and we invite you to the next press conference on 8th of October.

Lux Pro Monumentis Foundation – the arranger of The Festival of Kinetic Art of Light – Light.Move.Festival.

On Thursday (3rd September), Lux Pro Monumentis Foundation – the organiser of the Kinetic’s Light Art Festival – Light.Move.Festival, along with the Łódź City and the Łódź Events Centre arranged an inaugural conference concerning the 5th edition of Light.Move.Festival. During the conference this year’s visual identity created by the MOSQi.TOAgencycame out. The conference was opened by Izabela Zbonikowska, head of the Łódź Events Centre. She pointed out that since the very beginning the ŁEC has been dynamically cooperating with the Festival as an important and valuable event on Łodź’s cultural map. It made us feel very nice. On behalf of the city, Mrs Zbonikowska sincerely invited to the Light.Move.Festival in Łódź. We have been collaborating with the City of Łódź over the last few months on a capable course of the festival. Our Foundation was represented by Beata Konieczniak – Artistic Creator of the Festival and the chairwoman of the Council of Lux Pro Monumentis Foundation. Under the hailstorm of questions she got, Mrs Konieczniak revealed the 5th editions’ mysteries which were strictly guarded up till now. Our dreams are about to come true – Light.Move.Festival is going to enter into the city in much stronger way than ever. On Piotrkowska, Tuwim, Sienkiewicz, Traugutt, Moniuszko streets, on Rubinstein’s and Schiller’s passageways, in the Sienkiewicz’s Park. We were surprised by the information that this year our deeply appreciated Plac Wolności will not be an arena for large-format shows. The amazement quickly disappeared under another news – the area of a revitalized power plant EC1 is going to be a an urban amphitheatre and the centre of events of this year’s edition. Creator of the Festival emotionally told about the Foundation’s involvement in activity aiming at promotion and creation of Łódź’s night image. Numbers have already shown a lot of information about this year’s edition: 20 000 m2 of lit elevations, 900 displays of large-fromat projections or 10 km routes for the visitors. The inaugural conference was also an opportunity to present the visual identity of LMF 2015. Wojtek Walas and Maciek Wiśniewski, the representatives of MOSQi.TOAgency, told the journalists about the inspirations – light, sound and EC1. On behalf of Lux Pro Momunemtis Foundation we thank the City of Łódź and the Łódź Events Centre for cooperation, MOSQi.TOAgency for a great project and the journalists for coming and a motivational discussion. We are flinging ourselves into work and we invite for the next press conference on September 24th. More news about the program, artists and electrifying Light.Move.Festival.Łódź 2015 will be available there. Rember that LMF 2015 is starting on October 9th at 6.45 PM!